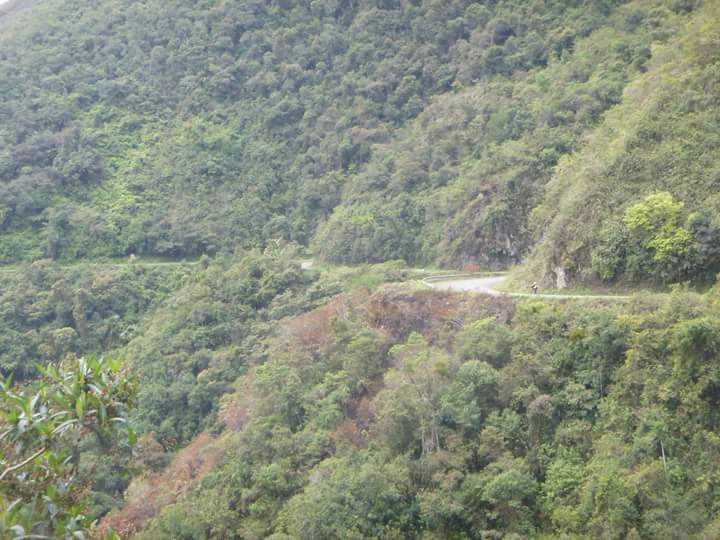 Most people have heard about death road either via google, the news or top gear. The Worlds Most Dangerous Road, or to the locals Yungas road. It used to be the main road from La Paz to Coroico. It is said that during the time the road was opened till 2006 (when the new road opened) an estimated 200-300 people died on the road a year. After visiting Yungas Road I can see why. Sheer drops await you and the road is extremely narrow in some places yet this was a main road. The road starts at around 4700m and you finish at 1100m, there are few guard rails to stop you falling into the abyss below. The common rule which still applies on Yungas road is that on the narrower sections the downhill vehicle are required to give right of way and move to the outer edge of the road to slow the vehicles down while passing. During the 1990s Yungas road became a very popular tourist attraction for thrill seekers, this started up a growing tourist business in La Paz for downhill biking.

I am not an avid biker or even remotely competent on a bike. At the most I can ride my road bike on flat tarmac so the idea of biking 62km downhill on death road did not appeal to me straight away. I wanted to see death road but from afar and possibly travelling in a van but definitely not bike it. However after some research and speaking to mates who had actually done it I decided I would give it a go with the option of if I didn’t like it or feel safe I could jump into the van at any time.

When I arrived in Lima and joined Peru Hop I asked people if they had done the bike ride, all said no, a few said they knew people that were doing it but hadn’t heard from them since. However when I joined the G Adventures Machu Picchu trek I met up with 2 Scottish lads who had both done and survived (just) the ride and said it was amazing. They had done the bike ride with Altitude which is a company I was pondering using.

I had emailed a few companies and Altitude and Gravity were the ones with the best reviews, and were the most expensive. I chose Altitude mainly because Gravity would not let me book on unless I went into the office 24 hours before the ride with my passport and insurance details which was not possible as I was arriving 10pm the night before. Altitude were great with me, they understood and went through everything via email.

The morning of the ride did not go smoothly as Altitude forgot to pick me up so I had to chase them to come back and collect me. The guys doing the ride were very good and spoke excellent English which is needed on this ride. The drive to the starting point is quite far, but they had some good tunes in the van – namely cheesy English pop. Once we got to our start point which is not Death Road but a long stretch of tarmac road for you to test the bikes out on, it started to snow quite heavily. It was freezing. We had a cup of tea and some bread rolls and kitted up. Best thing with Altitude for me was the full face helmets to protect your head and teeth. I had read many horror stories relating to other companies only providing normal biking helmets which to me were not sufficient enough on a dirt track down hill and there are stories of people falling off and losing teeth.

The kit included elbow pads, knee pads, jacket and trousers (not waterproof), gloves and full face helmet. Once we had our kit on we got our bikes. There were two bikes available Specialized Status II and Transition Bottlerocket main difference other than price was Specialized has 220mm suspension vs 160mm. I chose to have more suspension. The guys alter the bike to fit you then and there and if you aren’t happy they spend time ensuring it is comfortable for you and feels safe.

Once the ride started it was pretty much straightforward downhill, making sure you pressed both brakes together to avoid flying over the handlebars as they were very responsive. The bike was worth the money, even on the tarmac road there were a few potholes which although I felt it wasn’t as bad as I expected. All I remember from this bit of road was how cold it was. We stopped once to check everyone was doing well on the bikes and to get a group shot and my fingers were blue. Managed to warm them up and set off again but half way to next checkpoint I lost all feeling in them and it was becoming a bit dangerous for me as I couldn’t grab the brakes efficiently. I asked for my bike to be put on the truck and the driver warmed my hands up by putting them in a cloth soaked with boiling water. At the next checkpoint the bikes were put back on the truck and we all drove to the start of death road.

The temperature here was a lot warmer as we had descended a fair amount from our starting point. We had a couple of group shots and individual shots at the start of the road which had now turned into a dirt track then we started off down death road.

The start of the track was quite wide but full of gravel which made for a bumpy ride, it was rather cloudy and still a bit drizzly so the view wasn’t great unfortunately. Plus side is the fact that you couldn’t see how far the drops were down to the bottom. Out of around 10 bikers there were 2 of us at the back taking our time going down, the others zoomed off. We shared the road with a few other tours one that stuck in my mind was Barracudas mainly because their lead biker came flying past me at a rate of knots without saying a word and skidding round the cliff edge, this is why there are deaths on the road each year as people in the tours try to keep up with idiotic fast leaders. Their safety gear was non-existent as well – normal bike helmet and their own clothes no pads etc. Luckily the tourists following him were more courteous and let me know they were coming up behind me on whichever side.

A few main points are that the road is gravely all the way down with some sections with larger rocks than others, the best spot to me was going under the waterfalls which although dangerous as it’s a narrow ledge lots of water and slippery ground it was the most fun. The famous death road pictures are taken just after a waterfall by most groups, it’s the largest waterfall I saw on the bike ride (this may change with the seasons). A quick walk after the waterfall and you sit as a group with legs hanging over the side of the cliff, looking down is not recommended for those with a fear of heights. I carried on at the back of the group taking my time my hands forever on the brake levers, hoping I didn’t catch a rock wrong and fall off. There were times where I lost the back end of the bike on a larger rock and my stomach went but I managed to keep upright somehow; however I wasn’t going that fast so the risk of me skidding and flying off the edge was minimal to non-existent. 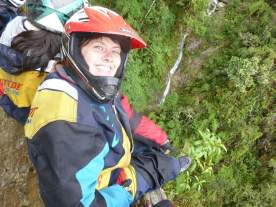 Towards the end there were sections of the road where you had to peddle uphill after nearly 55km downhill, add to the fact we had descended nearly 3000m and the temperature had risen substantially this short section was really quite tough. After this little section there’s another meeting point which signalled the end of death road, the others greeted us with a round of applause, it is a great sense of achievement and I was thankful I was all in one piece. We took off our jackets and trousers that Altitude had lent us and had a few pictures taken. This was not the end of the bike ride though, we had another small section to get to the bottom to where we would be put in the vans and taken off for a shower and some food. This bit is an easy road section however I was even more cautious here as I knew how close we were to the end and I didn’t want to fall off. My hands ached at the end from holding on so tight and grabbing the brakes. 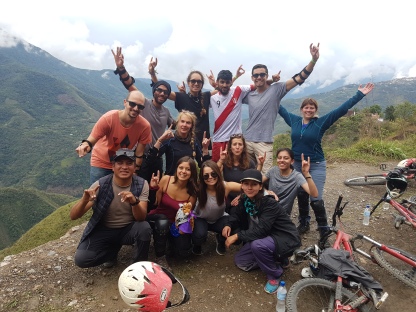 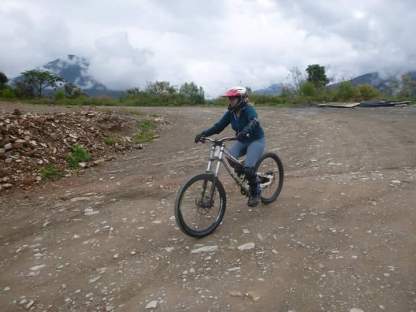 At the end we had a little presentation given our “survivor” tshirts which are really good (order size smaller as they were large) and a few pictures and headed off for an average lunch and a long drive back to La Paz.

I love the great outdoors and travelling, so I try and combine them as much as possible. I am also a massive fan of F1. My goal is to someday summit an 8000m mountain, but hopefully I will get to climb many other mountains along the way. View all posts by Globetrotting Expeditions

Stunning place to stay on the West Coast of the Lake District at the foot of Black Combe, close to Coniston and Wasdale. Great place to stay for hill walking in the lakes and mountain biking. 4 ensuite rooms, bar serving beer, wines, spirits and a wide selection of single malt whisky, as well as evening meals.